Have you ever watch the movies or film? Was it good? Do you like it? What is your favorite movie? What kind of genre do you like? What is your favorite movie country? Okay, Let’s stop asking question now. This is the last round and the last exploration for my third year. I was one of the lucky students who get to choose to learn with two Hollywood star. They are Aviv and Lianne. Through seven weeks, we have divide into two team. There are acting class and editing class. We have learn different skill for five weeks and for the last two weeks we have made an amazing film together.

Let’s talk about me 🙂 For this amazing film, we have different roles and I am Production Designer! I am the head of the production designer. My role is to dress up the actor and have all the props ready for them. This role is kind of hard because I need to ask for all the props and clothes for the actor. I enjoy my role and I think, I’ll pay my best effort on doing my role.

What I have learn from this exploration is so much to talk. It’s including the technique of shooting the video, how the different role do their job, types of film, story or explanation behind the story, the evolution of the story and the technique of editing the video. I can say that, after I learn about all those things, every time I watch the movies, I always look at the angle that they shoot, the tone, the design and other things. During the seven weeks that we have learn, our teacher do screening a lot of movies. My favorite movie among all of them is The Matrix. 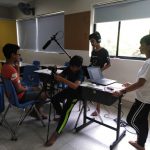