Codeacademy is the website that we use to learn Python. I never learn code before and honestly, I don’t really like it. Python is one of the languages in Code. It is known as the easiest languages. I don’t know what it feels for you guy when you don’t like something and you need to force yourself to love it or interest on it so that you can learn.

Let me talk more about Python. Python is a very simple language and has a very straight and forward syntax.

Down here is some of my code that I have done so far. I hope you learn something :). 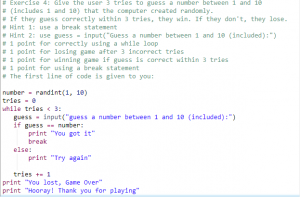